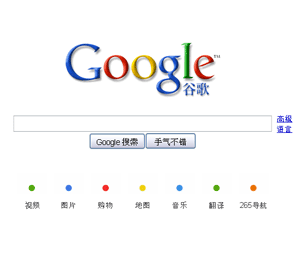 It has been no secret that the Chinese government censors the media. China has received great criticism over their internet censorship such as blocking historical content that hurts the government’s image (i.e. tiananmen square), monitoring skype message, replacing Olympic faces with “prettier” faces to enhance their image, or unfair jailing of protestors during the Beijing Olympics and lying about it.

Search engines had no choice but to comply to the Chinese government’s demands in order to make inroads into China’s 1.3 billion population. Thus it is big news today that Google announced they will no longer comply and will pull out of China if needed be. This was partially a response to a sophisticated and targeted attack on their corporate infrastructure. Google found an organized attack that originated from China that resulted in the theft of intellectual property. It was an attack targeting 20+ large companies from different range of businesses. However what made this attack significant was that there is strong evidence that the primary goal of the attacker was to access the Gmail accounts of Chinese human rights activist. They also discovered that independent of this attack, that the email accounts of these human right activist were “routinely accessed by third parties” via phishing scams and malware placed on their computer.

China has been heavily criticized in the past for unfairly monitoring and putting down human rights activist. In the Beijing Olympics, China communicated as if their people were free to voice their opinions but had strict and often unfair methods of jailing anyone who would protest (most protests has to do with human rights). The Chinese government is also notorious for unfairly jailing activist as well as people of faith.

When Google launched in china, they noted “we will carefully monitor conditions in China, including new laws and other restrictions on our services. If we determine that we are unable to achieve the objectives outlined we will not hesitate to reconsider our approach to China.” It seems Google has finally had it and has thrown down the gauntlet.

“These attacks and the surveillance they have uncovered–combined with the attempts over the past year to further limit free speech on the web–have led us to conclude that we should review the feasibility of our business operations in China. We have decided we are no longer willing to continue censoring our results on Google.cn, and so over the next few weeks we will be discussing with the Chinese government the basis on which we could operate an unfiltered search engine within the law, if at all. We recognize that this may well mean having to shut down Google.cn, and potentially our offices in China.”

Basically, no more censorship or we bounce. The choice is up to China. Whether other search engines will follow suit is still to be determined.

This isn’t the first time Google and China butted heads. China’s CIIRC (China Internet Illegal information Reporting Center) has several times made demands for specific items to be blocked and has even blocked full sites like Google, Twitter, YouTube, and Flickr when sites did not meet their demands.

Yahoo had long ago pulled out of direct competition in China but since then took the tactic of making investments into local search players. Yahoo has been sued several times by pro-democracy advocates who claimed Yahoo gave personal information to the Chinese authorities. In November ComScore showed that Baidu had 62.2% of the Chinese search market while Google only had 14.1%, MSN at 5.1%. However Analysys International, a research firm in Beijing, said that Baidu’s share was closer to 58.4% in Q4 compared to 35.6% in Google. As of last tuesday, Baidu’s shares jumped in stock price.

How will China Respond to Google’s Stance on Censorship

How will China response? This is not just an issue between Google and China, but a political issue. Google doesn’t have the power to convince China to change it’s ways and China will not lose out on much by letting Google go, however China can’t be happy with bad press they are receiving through this ordeal and the political aftermath if Google eventually has to leave.

[UPDATE] As expected, China gave an indifferent response. Basically anyone who wants to do business in China must follow their laws. Foreign Ministry spokeswoman Jiang Yu, “The Chinese government administers the Internet according to law and we have explicit stipulations over what content can be spread on the Internet.” If Google sticks to their guns, they’ll have to simply move their way out of China. But should they?