Proper citations! This comic was illustrated by Kiersten Essenpreis, a New York-based artist. Obviously was written for Mashable which has a series of these kind of comics. This one happened to be the funniest. Great job Kiersten. Look forward to more!

Here at Clean Cut Media, we not only talk about bad influences of media, but we try to balance it out by promoting good media. We like clean movies, we like clean & awesome commercials, and are happy for the companies that promote such media. Media is part of life folks, just a matter of knowing what to consume, not to consume, and of course how much we should be consuming. Below are a few recent commercials with some buzz that are clean cut and well made. 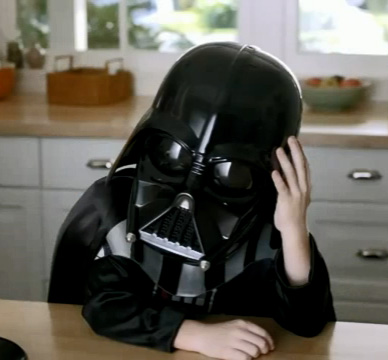 Volkswagen did something most companies would not have thought of. Reveal their Super Bowl commercial before the Super Bowl! One may think, why? It takes away from the hype! Oh, but I see this as a good move on their part. In about 2 days, it already has 6 million views as it gets passed along virally, hogging all the attention, riding on the hype of all the anticipation. Good move Volkswagen. Also kudos on the nice, simple, clean cut commercial. The Video shows little Darth Vadar in his attempts to use the force. Watch it!

Of course the commercial says nothing about the car at all. Just trying to associate warm fuzzy feeling with the car and brand. That is the state of advertising folks!

A clear shot at it’s “rival” AT&T. You have to love the simplicity of this ad, yet it indirectly emphasizes their differentiator – their reputation as the best network. It builds their reputation and continues to link the idea that Verizon’s service is clearly better than AT&Ts. It doesn’t directly attack anyone, but pokes a bit of fun, bringing out that “ooooHH” feeling we get when someone has a good witty, comeback. Or maybe it’s just me.

Meanwhile Apple laughs at all the excellent publicity they are getting as the two networks dual it out. Apple is the ultimate winner.

I also enjoyed their trailer video. Simple, Clean “cut”, and to the point:

For those new to Clean Cut Media, here we like to post not only the latest news and commentary on media influence and social issues, but also post wonderful pieces of art and media that are clean and well done. Occasionally we also post videos that went viral so we could be a source in which to keep up with the latest viral video.

See this beautiful piece of music below. If you appreciate music, it will knock your socks off. Such a beautiful things to hear.

From the album “The Opposite Side of the Sea”, released in March 2009. This song is titled “Her Morning Elegance”. This video is a very artistic use of stop motion utilizing a bed as the frame and bed items as the everyday object. Just play the video below and see what I mean.

Latest Viral Video: These aren’t all that recent, but still worth a quick look.

Did you Know Video?

This “Did you know” video covers some of the latest statistics in regards to the growth of the information age and the incredible speed of globalization. The video starts with some incredible statistics on the growing population of China and India, then starts to touch upon how quickly our world is changing in terms of information, careers, and the way we communicate. Check out some of these statistics covered in the video

This well made video covers a lot of very interesting modern statistics. I am certain you will find it very interesting. It really shows how quickly our culture is becoming global and technologically dependent.

Below are two fun viral videos that pokes fun at Twitter and the type of info that it is used for. Twitter has often been ridiculed for being the medium in which people update each other about every mundane thing they do. “Watching TV with my Cat” “I forgot how much I like my pickles”

This is a hilarious video of two people at work discussing twitter. One person just started to use twitter and is raving about it’s uses while his co-worker adamantly claims that its absurd. More hilarious if you are familiar with Twitter. (Info: The White Twitter Fail Whale is what appears on the screen when Twitter has a problem such as too many users hitting their servers at once. The Fail Whale has it’s own subculture including t-shirts, clubs and sculptures). Warning, little blood at the end.

Viral Videos are online video’s that gets spread around very quickly. People like the video and send the links to their friends who send to their friends and so on. Typically when people say a video goes viral, it means millions of people view it within a span of several days. Companies all dream of having one of their videos go “Viral”.

Periodically as part of the creativity series, I’ll post some videos that have gone viral. Of course they need to be clean, creative and something worth sharing. Slide these in between more serious posts. There are too many to share so I’ll post 2 at at time. Enjoy!

Susan Boyle – Britains Got Talent 2009
Susan Boyle a 47 years old charity worker from West Lothian, Scotland. Currently unemployed she went on “Britain’s Got Talent”, an American Idol Equivalent to sing for the judges. With a small stature and elderly age, everyone laughs as she speaks about wanting to be a professional singer. She chose to sing “I dreamed a dream” from les misérables. See what happens.

Can you Undo your Past? Gracepoint Berkeley Church

Gracepoint Berkeley Church, a Christian Church located near UC Berkeley, recently had a large scale performance called Gracepoint Live or “GLive”. This production occurs every 2 or 3 years where 100s of college students who are part of one of their affiliated Christian campus groups perform several skits and musicals tackling life questions. About 1900 were in attendance this past weekend.

This year their theme was “UNDO: Can you delete the past?” discussing the regrets we have or will have about life. Below is their opening video.

The images of a baby fetus.
The heart beats, the baby moves.

“This child’s future is a broken home.”
“He will be abandoned by his father.”
“His single mother will struggle to raise him”

The baby continues to grow…

A pro-choice video, we assume..

Then in a twist of fate,

“This child, despite the hardships he will endure, will become the first African-American President.”

We always talk about media influencing children and culture, but how about children influence culture through media!?

A creative speech video that has been making the rounds a few months ago is the video of a young Canadian 12 year old Lia who chose the topic of abortion as her topic for a school speech contest. Her teacher wanted her to pick a different topic but she chose to continue. As you’ll see below she was an excellent speaker and crafted her arguments with thought and strategy.

“What if I told you that right now, someone was choosing if you were going to live or die?”

“Fellow students and teachers, thousands of children are right now in that very situation. Someone is choosing without even knowing them whether they are going to live or die.”

“That someone is their mother. And that choice is abortion.”

Following are some incredible 3D Building Art drawn on the side of buildings and other large structure. The 3D paintings look fantastically real forcing those passing by to stop and gaze in awe, of course if they even notice it!

I’ve also added one more 3D Chalk Art below due to it’s popularity on this site. Enjoy!

This 3D Building Art is by far the most intricate and my favorite. Amazing details and the depth of the 3D work is quite amazing. If I had a car I would probably drive into the wall and get seriously injured. Be grateful you saw it here first!

This batch of 3D Chalk art is even more amazing then the ones you saw in the previous post. Huge list of amazing pictures below. Pick your favorite at vote at the bottom!

Creativity: 3D Chalk Art in the Streets Part I

3D Chalk Art in the Streets Part I

This is the first of four posts highlighting the beautiful 3D chalk art of Julian Beever. Julian is famous for his incredible 3D chalk art he draws in the streets. It is carefully drawn at incredible angles so that when the viewer stands in front of it, the art looks like it jumps off the street completely in 3D. His 3D chalk art is often drawn in long stretches of pavement. It is hard to make out what is is supposed to be from the back or the sides but from the front you can’t help but be awed by the artwork. I do not know if all the artwork posted below is Julian’s work but I know most of it is. Enjoy! Many more below the jump. Vote for your favorite!

A very simple 3D Chalk Art piece, but none the less very clear and amazing. Making me thirsty!