And the winner of the National Geographic 2014 photo contest is…

“A Node Glows in the Dark” by Brian Yen from Hong Kong. 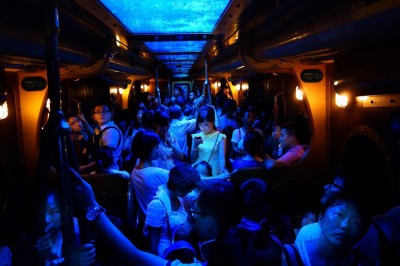 “I feel a certain contradiction when I look at the picture,” Yen told National Geographic. “On the one hand, I feel the liberating gift of technology. On the other hand, I feel people don’t even try to be neighborly anymore, because they don’t have to.”

This picture reminded me of a time I visited Tokyo about 7-8 years ago. As soon as I entered the crowded train, every single hand immediately went into their pockets, pulled out a phone, and every head went down as each person looked intently at whatever their little screen was showing them. It was an eery experience as the entire train was dead silent. These were not all single riders mind you, but couples, families, but no one spoke except us loud Americans.

But I was also told, Japan is always a year or two ahead of America in terms of culture. And truth be told not long there after, I look around and people are glued to their smartphones. Kids playing games. Adults watching videos. A couple at a cafe, both staring at their phones.

Will it get better or only worse?

What comes to your mind as you look at this picture?