This is going to create some interesting controversy. French lawmakers have decided to regulate airbrushing photos by requiring disclaimers on photos that are photoshopped or enhanced in any way. Image manipulation has been a practice going on since long before photoshop, to create stunning and perfect pictures for advertisement purposes. This action was taken as a way of fighting against body image issues at the source.

This disclaimer would be needed in newspapers, photos, magazines, political pieces, product packaging, art photography and any situation where there is a “retouched photograph aimed at changing a person’s physical appearance.”

Hours of Hair & Makeup followed by Hours of Photo Manipulation 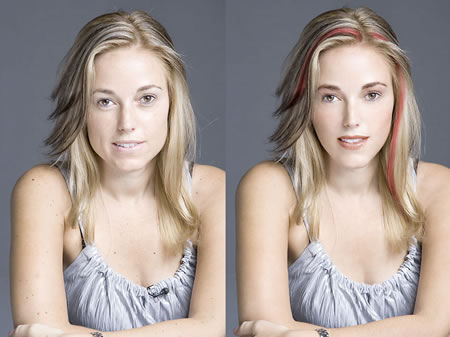 The photo above is an example of what photoshop can do in a mere 5 minutes of photoshop work. During a 5 minute segment on Homepage, a show on CP24, Greg Danbrooke demonstrated how Photoshop is the real tool behind the perfection we see on magazine covers and billboards.

Check out the step by step difference here

Also if you haven’t seen the Dove Evolution Video watch it!

This law was proposed by French MP Valirie Boyer who also released a report on anorexia and bulimia. The concern has always been the effects of unrealistic body images has on young boys and girls. Starting at an early age a girl is exposed to so many images of beautiful celebrities, disproportionate barbie dolls, photos of women who have slender body types and seemingly perfect features. It is no wonder 62% of girls feel insecure about themselves and 81% of 10 years old fears getting fat.

“Many young people, particularly girls, do not know the difference between the virtual and reality, and can develop complexes from a very young age. In some cases this leads to anorexia or bulimia and very serious health problems.” – French MP Valerie Boyer

50+ French politicians have voiced their support for this legislation. The fine for breaking this law would be a fine of approximately $48K USD or 50% of the campaign costs.