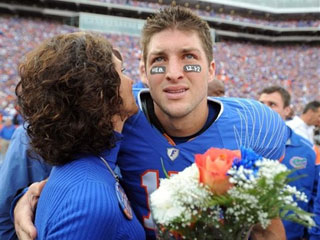 Have you ever heard of a viral video that no one has seen? A group called Focus on the Family has shot a pro-life spot featuring the college superstar and former Heisman Winner Tim Tebow. The spot will star Tim Tebow and his mother who will discuss how she went against the doctor’s advice to abort her son due to a life threatening infection. After contracting a dangerous infection during a mission trip to the Philippines, doctors recommended she terminate her pregnancy, fearing she might die during childbirth. They named their son “Timmy” who later was known to the world as Tim Tebow, the University of Florida’s Quarterback who led his team to national championships in 2006 and 2008. He also won the Heisman Trophy in 2007.

Tim Tebow is the biggest star in college football, if not considered one of the greatest college football player to ever play at that level. He is also known for being born in the Philippines while his parents were in the mission field and still frequently joins his father on mission trips there. He also ministers to prisoners during the off-season.

As soon as this news broke out, women’s group started to ask CBS to drop the ad. So far CBS has declined their request.

“I know some people won’t agree with it, but I think they can at least respect that I stand up for what I believe… that’s the reason I’m here, because my mom was a very courageous woman. So any way that I could help, I would do it.” – Tim Tebow

CBS has run into similar controversies before. Back in 2004, CBS had rejected a Super Bowl ad from a “liberal-leaning United Church of Christ” that highlighted their welcoming stance towards gays and others who felt shunned by conservative chruches. This ad would be one of the first advocacy ads accepted by CBS during the big game.

When CBS was asked to comment on their current stance of allowing this ad to air, they replied that their past stance of rejecting any controversial ad as they saw fit “did not reflect public sentiment or industry norms”.

“We have for some time moderated our approach to advocacy submissions after it became apparent that our stance did not reflect public sentiment or industry norms.” – Dana McClintock CBS Spokesperson

One of the interesting developments, is with the rise of social media, this topic has resulted in tons of discussions and activities in sites like Facebook, Twitter, and YouTube. Both sides have started to form groups, throwing their support for or against this ad. Below are the largest growing groups on Facebook:

Online buzz is continuing to ramp up and will inevitably become larger as Super Bowl Sunday nears. The question is what will CBS do? Freedom of Speech? Avoid the Controversy? One thing that is certain – once it airs, it will spread quickly across the web and there will be numerous discussions over this video spot. The discussions are already heating up.

What do you think? Should CBS Air the Super Bowl Ad?

Another interesting point noted by a commenter on the web: