Online Shopping for Black Friday once again broke all previous records with sales of $816 million, up 26% compared to 2010. Even Thanksgiving Day (November 24th) which traditionally is a low sales day, saw a 18% increase in sales to $479 million.

Cyber Monday is estimated to have produced $1.25 billion dollars in sales (according to ComScore), up 22% from Cyber Monday 2010 which also was a record at the time. Last year we were stunned as Cyber Monday exceeded 1 Billion. However the sales continue to roll in. Other surveys conducted by IBM and eBay found even greater increases of 33% and 25% respectively. It’s final. Americans are spending more and more each year. Doesn’t matter if the economy is down, people will buy what they want. 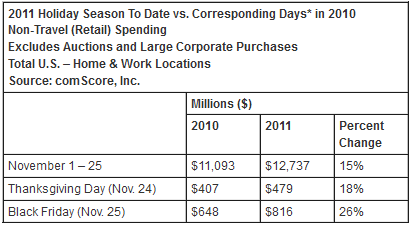 Amazon, Walmart, Best Buy, Target, and Apple were the top 5 most visited retailer properties during Black Friday. 50 million Americans were out and about, visiting retail stores to search for the best Black Friday deals. These visitors accounted for a 35% increase in visits versus 2010. 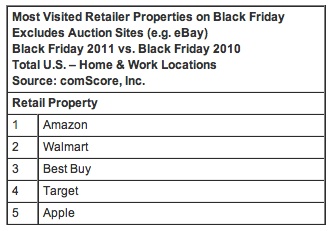 A source from Apple Retail has shared that Apple’s forecast for Black Friday was 4X the normal sales levels. However, by 7PM, Apple had already blown past those forecasts fueled through big ticket items like the iPad and MacBook Air sales.

Mind Boggling Numbers: What do you think?