More Advertising Leading to More E-Cigarette Use Among Teens 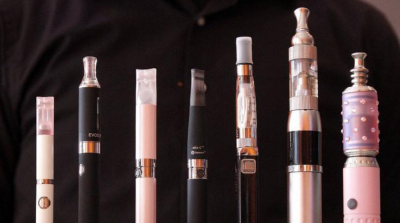 A 2015 study in the American Journal of Preventive Medicine found that teens who saw a e-cigarettes ad on TV were 43% more likely to say they would try e-cigarettes than were teens who did not see the ads.

“It is unacceptable that e-cigarette advertising remains unrestricted,” American Heart Assn. Chief Executive Nancy Brown said in a statement. “Kids are encountering these ads virtually everywhere – in stores, online, in newspapers and magazines, and on television and in movies. And the sad truth is, it’s working.”

“The U.S. Surgeon General has found that tobacco and nicotine are not safe, and nicotine negatively impacts adolescent brain development and has been associated with lasting cognitive and behavioral impairments, including effects on working memory and attention in youth.” 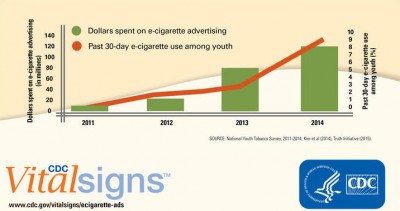 In a survey of 41,551 high school students in 377 schools around the country, 8th and 10th graders were twice as likely to have used e-cigarettes in the past 30 days then regular cigarettes. Not only do these e-cigarettes come in fun flavors like cotton candy and apple pie, it’s popularity may have been spurred by popular perception among teens that e-cigarettes do not harm their health. For example among 8th graders, only 15% viewed e-cigarettes to be harmful for them versus 62% believed regular cigarettes had harmful effects.

E-cigarette advertising is still not regulated. This has to change.

Everyone should be mindful that that e-cigarettes are very prevalent both in high school and in middle school. E-cigarettes do not leave the smell of “smoke” thus it would be easy for parents to be unaware of it’s use by their children. It is also important that parents educate their children on how harmful nicotine is to their brain development.