Pretzel Crisp says “You Can Never Be Too Thin”

Disclaimer: The narrator in the video calls the campaign “bull****” at the of the video.

You Can Never be Too Thin – Pretzel Crisp

In early August, Pretzel Crisp launched an an ad campaign in New York City with several slogans including “You can never be too thin”. The ad was found everywhere from ad stands to bus stands and in subway stations. Immediately the news took hold of the blogosphere spread the the power of social media, but the attention was clearly not the attention Pretzel Crisp intended. 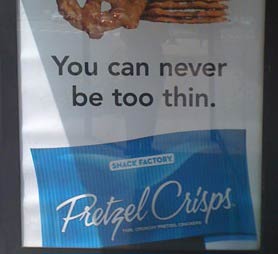 Photos of the ad was posted on a women’s blog called Jezebel followed by a scathing and condemning posts angry at the implications of such a message: “you can never be too thin”. The slogan was brought up as a “thinspiration” motto used by the pro-anorexic community. It was deemed wrong and completely irresponsible as it promotes unhealthy weight loss. The photo was posted and reposted on numerous blogs and spread through articles, tweets and videos from other bloggers.

The company responded to the flurry with a tweet on it’s twitter account. The response? “Thin just happens to be a good word to describe the shape of our product.” As the issue became bigger and bigger, the VP of Marketing started to show up on interviews with bloggers to explain the situation. He explained that they were a small company and simply wanted to launch an attention grabbing ad. Well if that was the goal, they achieved what they wanted!

Pretzel Crisp soon tweeted that “We didn’t intend to advocate unhealthy weight loss with our ads. Thanks to all for the feedback. The ads will be taken down asap.” The people rejoiced. Justice was served, or so they thought. The ads were replaced with one of the other pro-anorexic play on words, “Taste as good as skinny feels”.

Outrage ensued again, but this time Pretzel’s response was that “you can never be too thin” was but one of four slogans and only that particular ad had negative responses. So they did the logical thing to replace that particular ad with one of the other three.

A week later, the company finally agreed to take down all their ads.

Many bloggers feel that this may have been a publicity stunt to raise more awareness of their brand. Though I am certain they were not expecting this level of response.

It seems like Pretzel just made a really bad mistake. They thought they had a clever advertising motto as they tried to convey their Pretzels’ thin shape. They did the right thing in quickly responding to the criticisms and taking action. Where they made the mistake was claiming ignorance in saying they only thought one of their ads were causing the problem. If they would have taken them all down, the impression they would have left with people could have been very different.

But I don’t think they had any intention of promoting a pro-anorexic message. Also as exciting as the idea of them plotting this as a publicity stunt – it unlikely they did that as well. Not with a touchy subject such as anorexia.

Take our Poll! Let us know how you feel in comments!