How the Smartphone is Destroying a Generation 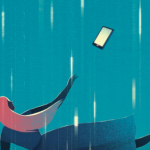 An interesting article by theatlantic: How the Smartphone is Destroying a Generation. Article snippet, infographic, and link below. Please share your thoughts in the comments below.

Athena is an expert at tuning out her parents so she can focus on her phone. She spent much of her summer keeping up with friends, but nearly all of it was over text or Snapchat. “I’ve been on my phone more than I’ve been with actual people,” she said. “My bed has, like, an imprint of my body.”

In this, too, she is typical. The number of teens who get together with their friends nearly every day dropped by more than 40 percent from 2000 to 2015; the decline has been especially steep recently…

…You might expect that teens spend so much time in these new spaces because it makes them happy, but most data suggest that it does not. The Monitoring the Future survey, funded by the National Institute on Drug Abuse and designed to be nationally representative, has asked 12th-graders more than 1,000 questions every year since 1975 and queried eighth- and 10th-graders since 1991. The survey asks teens how happy they are and also how much of their leisure time they spend on various activities, including nonscreen activities such as in-person social interaction and exercise, and, in recent years, screen activities such as using social media, texting, and browsing the web. The results could not be clearer: Teens who spend more time than average on screen activities are more likely to be unhappy, and those who spend more time than average on nonscreen activities are more likely to be happy.