Internet speed around the world continues to become faster as technologies advance. That is not a surprise. However the speed difference between a country like Korea and the United States are quite startling.

South Korea, who already has the fastest connection in the world, continues to increase their national internet speed at the fastest rate as well. Korea owns 6 of the top 10 fastest cities in Asia and as a country averages 14.6 Mbps. Compare that to the United States where only 4.4% of users are above 10 Mbps. Korea averages 14.6 Mbps. In Korea 45.6% of users have connections above 10Mbps. 75% are connected above 5 Mbps while only 24% of the United States is at that level. 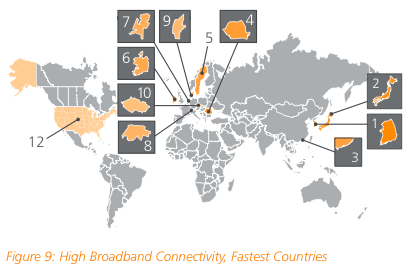 Compared to 2009, the distribution of connections in South Korea has risen in all the high speed categories. 16% of South Korean users are above 25 Mbps compare to only 1.9% for Japan who falls second in these rankings.

Those Asians are very fast aren't they!

Why the huge gap in South Korea?

The primary reason South Korea sits so far ahead in terms of connection speed, is that Korea has the infrastructure to do so. Back in the late 1990s there was a nationwide focus on developing cutting edge technology. The government built out the infrastructure necessary to get the entire country on high speed broadband. In the United States you have to walk into a Starbucks with an AT&T account or Borders to get some free wifi. Connections are now available everywhere you go. It has become part of the culture and an expectation.

Another more interesting topic, and worth it’s own blog posting, is South Korea’s obsession with Internet Gaming. South Korea could easily be considered the gaming capital of the world. The “elite” of the PC gaming world are often full fledged celebrities as thousands gathers in stadiums to watch the elite play each other on a game of Starcraft. These tournaments are broadcast nationally on TV by five national channels dedicated solely to gaming. Believe it. 1% of all TV watched is accounted for by these channels. That is a lot of people!

Korea has five major leagues for professional Starcraft alone. All the elite gaming teams know if they want fame, they need to travel to Korea to compete in tournaments. These “clans” get corporate sponsorships and wear corporate logos as if they were about to enter into a nascar race. It has become a popular desire for high school boys to pursue a career in being a professional gamer just as boys would want to become a professional basketball player. Even the “commentators” on these networks have become full fledged celebrities just as famous sports commentators.

Some 26,000+ Net cafes and game rooms are found all over the nation where people can come to pay to play games in a room full of fast computers and fast connections. These cafes make up around $6 billion a year from visiting gamers.

With gaming so tightly integrated with Korean culture, it is not surprising that the demand for faster high speed internet continues to raise the bar in terms of internet connection speeds across the nation.

Ever Fading Sensitivity to Violence in Media