Check out this clip. It speaks for itself. You’ll see what I mean. This homeless man was discovered by the Columbus Dispatch along Ohio’s I-71 HWY. With a small sign that says he has a “God-given gift of voice” this homeless man started this year as a panhandler but now has been given a second chance at life. This small clip went viral leading to a compassionate response of the masses and offers from various radio stations and gigs. Check it out.

His name is Ted Williams. He used to be a radio announcer who fell on hard times and also fell into the habit of “alcohol and drugs and a few other things”. He says he has been clean for 2 and a half months now and profusely thanks God that despite his formerly bad habits, still has maintained his incredible voice. 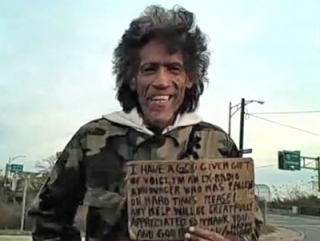 “I have a god given gift of voice. I’m an ex-radio announcer who has fallen on hard times. Please! Any help will be greatfully appreciated. Thank you and God bless. Happy holidays,” reads Williams’ roadside sign for help.

Here he appeared on the CBS’ “The Early Show”. You can’t help but to feel compassion and be excited for him. He profusely thanks God and really cherishes this second opportunity God has given him. He holds back tears thinking about all that has happened and how he will have a chance to be reunited with his mother back in Brooklyn.

Enjoy! Let us know your impressions and thoughts below.