What are our kids learning from television? The Federal Communications Commission says children currently spend more than three hours a day watching television. Although the FCC has enacted provisions that require broadcasters to improve and increase the educational content of children’s television, there is no consistent way to ensure that what children watch has any redeeming qualities. 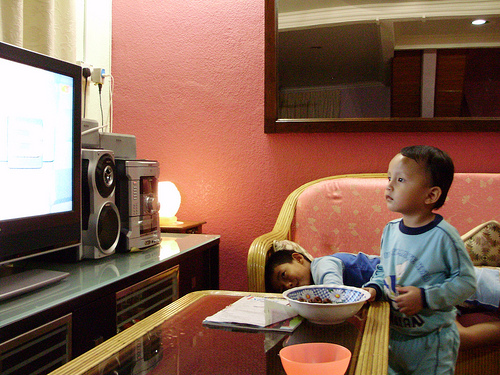 Children’s television, by and large, neglects education and jumps right to banal programming. Although “Spongebob” is entertaining, there isn’t a lot of educational value in watching Mr. Crabs or Patrick wade their way through thirty minutes of silliness. Of course, “Spongebob” is just one of dozens of examples of children’s television that is simply there for entertainment and not to teach children lessons.

There is even less family-friendly programming during traditional family viewing times in the evening after dinner. There are reality television shows in which people run around half dressed, sex is implied if not practically explicit, and there are comedies that might be funny for adults, but are inappropriate for kids.

Amazon is combating the current state of children’s television by attempting to create shows that will also be educational. The company is developing “Sara Solves It,” a show in which two friends, Sara and Sam solve math-based mysteries each episode. In some ways, this may be a 30 minute episode reminiscent of Electric Company and other similar television programs. “Creative Galaxy,” described as an interactive art adventure series, is another program Amazon is developing.

Parents who are interested in finding quality programming for their children will be able to vote with their pocketbooks to determine whether more programs and episodes will be made. The won’t be at the mercy of networks and their advertisers, forced to watch what is already on television. Parents can order these programs directly into their homes and watch them with their children any time they like.

Netflix is producing a TV adaptation of the upcoming Dreamworks children’s movie “Turbo.” The show, called “Turbo F.A.S.T.” is about a snail who dreams of being a racer and the glory that would come from it. Then, through an accident, he is able to achieve his dream.

Streaming services are significantly less expensive than cable packages, though more limited in many ways. But if you don’t watch very much TV and are comfortable with content options of Amazon or Netflix, you can get them for as little as $8 a month, compared to approximately $30 a month for a bare-bones cable package, notes Direct2TV.

If children are going to watch television for hours a day, it looks like they will have plenty of educational options moving forward.