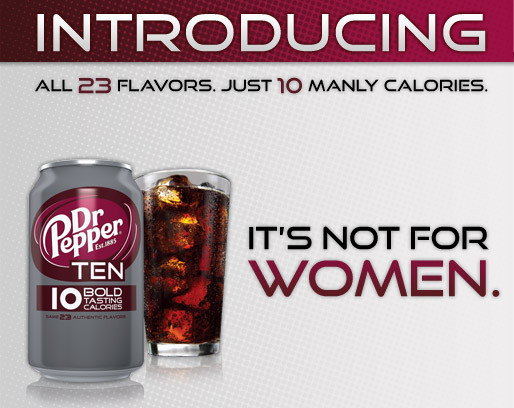 Coke has Coke Zero, Pepsi has Pepsi Max, and so Dr Pepper now has Dr Pepper TEN. Dr Pepper TEN caused quiet a stir from it’s launch due to the funny and semi-controversial ad. The TV commercial shows a mini-action film where a manly man drives through the dangerous jungle, Dr Pepper TEN in one hand, while shooting enemies and punching snakes with the other. It is action packed and ends with the quote “NOT FOR WOMEN.” Dr Pepper has taken a unique position of catering the drink to men, who perhaps view diet drinks as unmanly.

Are Diet Drinks too Unmanly?

Many years ago, Miller Brewing Company came out with Miller Lite, a beer with less calories. Great for those who wanted to avoid the beer belly and wanted to watch their weight. Yet there was real concern that men wouldn’t want to be associated with diet drinks because perhaps it wasn’t very manly. Miller chose to launch a bunch of TV commercials depicting manly men like Bubba Smith, Joe Frazier, and Ben Davidson to endorse the drinks and start arguing over different topics such as whether lite beer has “great taste” and “less filling.” By using manly men as well as focusing the argument over taste and body, Miller was able to divert the attention away from whether it was manly or not. To top it off, these ads would sometimes have these manly men argue then jump into a bar brawl. These series of ads are often ranked as one of the best ad campaigns in history. The ad campaign was a great success as nobody ever though of lite beer as unmanly. 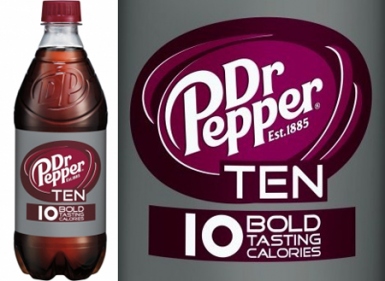 The commercials caused a stir. Some people find it offensive and exclusionary especially due to the tagline “not for women.” Others think it’s simply funny and there is no real harm done. Just like certain shampoos or deodorants target women, many feel it’s not a big deal to just target men. One thing we can all agree on is that it has drawn the attention it intended do. The Facebook page has been buzzing with a lot of back and forth between the two camps. Women put up pictures of themselves drinking Dr Pepper TEN while others argue that it’s discriminating.

I personally don’t take much offense to the commercial mainly because it doesn’t degrade woman in anyway. It’s just a product focusing on a specific target group. I don’t like the fact that it plays on stereotypes of men, but so far the ads haven’t been offensive in anyway. Just to give perspective, I find those AXE ad campaigns highly offensive to women. Another product targeting men, but often degrading women in the progress. Dr Pepper TEN so far doesn’t do the latter.

How does Dr Pepper TEN Taste vs. Diet Dr Pepper?

But the real question is, how does it taste? Diet Dr Pepper has always been one of the better diet drinks that does an excellent job retaining the flavor of the original. Coke Zero is another. How about Dr Pepper TEN? I had one for the first time this week. It’s excellent. I actually like it slightly better than the Diet version. Plus I feel more manly. Just kidding. Don’t need a drink for that.

Watch the commercial below and tell us what you think!